“Previously, I reviewed the Waverider 490 powered by a 40hp Titan outboard. In the seas off Mooloolaba the Waverider’s radical hull – with its remarkable similarity to the successful features of the very well received Kapten Boat Collar – proved itself as a soft riding straight tracking craft with enormous potential.

Waverider Boats, with Pat Jones at the helm, have advanced to the point where overall finish is of a high standard throughout, the interior layout suited to a wide application of fishing pursuits and there’s a choice of several models available for buyers. 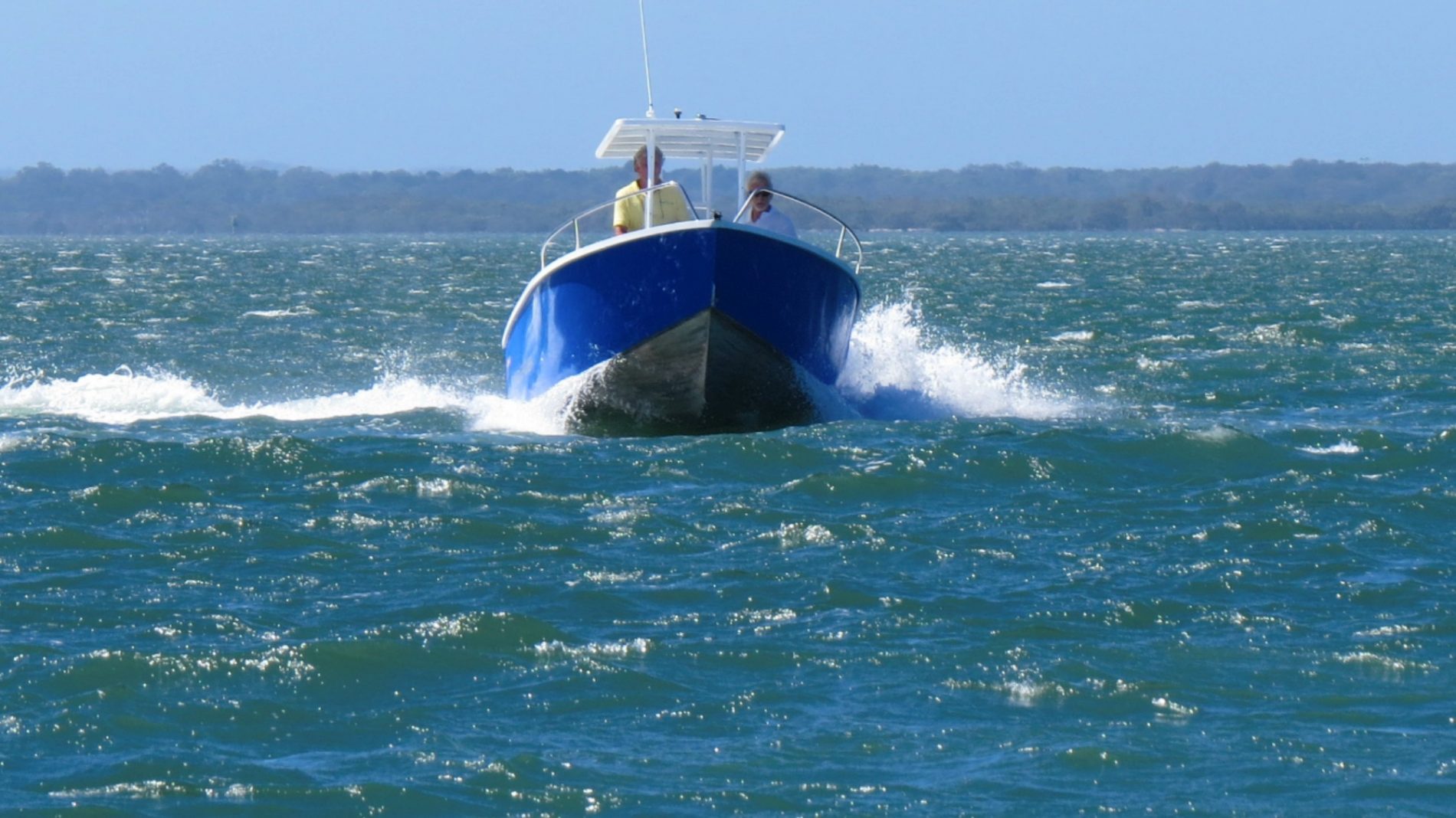 It’s all about the Hull

The basic Waverider 610 Centre Console –  Waverider’s hull’s design concept remains virtually unchanged from the earlier Waverider 490. The 610’s hull, constructed from 4mm plate throughout featured a central, quite fine, entry section nestled within a pair of steeply reversed and quite massive outer chines. It’s a three section affair, but it certainly works!

In practise the fine entry reduces impact against waves or chop while the tunnels created by the large external chines have a significant input on performance due to the amount of air being trapped under them while under way.

The hull’s under water section, which is really a work of art given the workmanship involved in accurately forming 4mm plate alloy to this degree, has its strength in the craft’s uncanny ability to remain rock steady at rest, an ability to deliver excellent performance from modest power, and a great sea-keeping capability in an offshore environment.

In 1.5m swells off Mooloolaba, the Waverider travelled very freely when running with swells and showed not the slightest tendency to broach or run off course with a wave on the transom.

The massive external chines, commencing just a little short of the bow’s entry section, gradually flatten out aft to be less prominent, although still of significance, at the stern where there’s a 15º deadrise. Adding to the Waverider 610’s ride and performance are prominent longitudinal under hull strakes; these also commence not far from the bow and running along the bottom of the hull for some distance.

The interesting under hull features described really do set this alloy craft apart from many contemporaries. I believe they are worthy of mention simply because of the influence they have on the quality of the craft’s ride and handling. 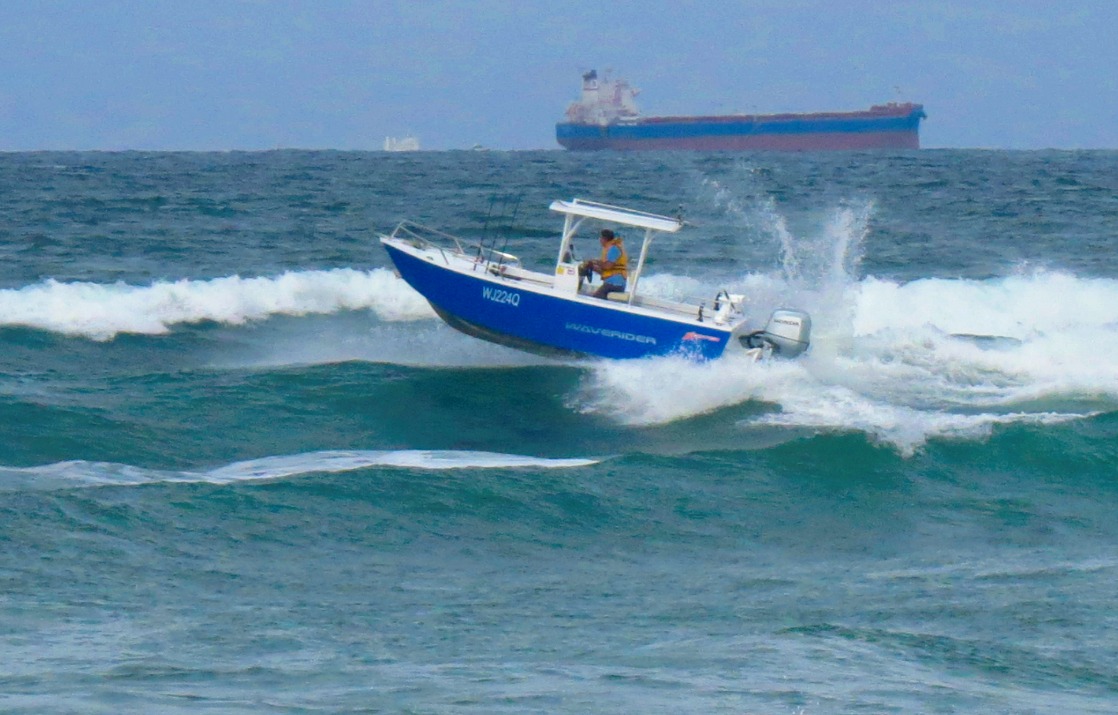 Offshore at Mooloolaba I was impressed with the craft’s rapid transition from rest to planing in around a couple of boat lengths and at a low speed of 8 knots (14.8km/h) at 2,500rpm. As I drove the Waverider Centre Console 610 into swells the hull refused to bang or register hard impact and it was immediately noticeable that any spray was kept well down and away from the craft’s interior.

The hull was very responsive to trim and could turn sharply when I wanted to chase down and then pass over a swell or two for the fun of it. The craft also turned without any noticeable leaning. 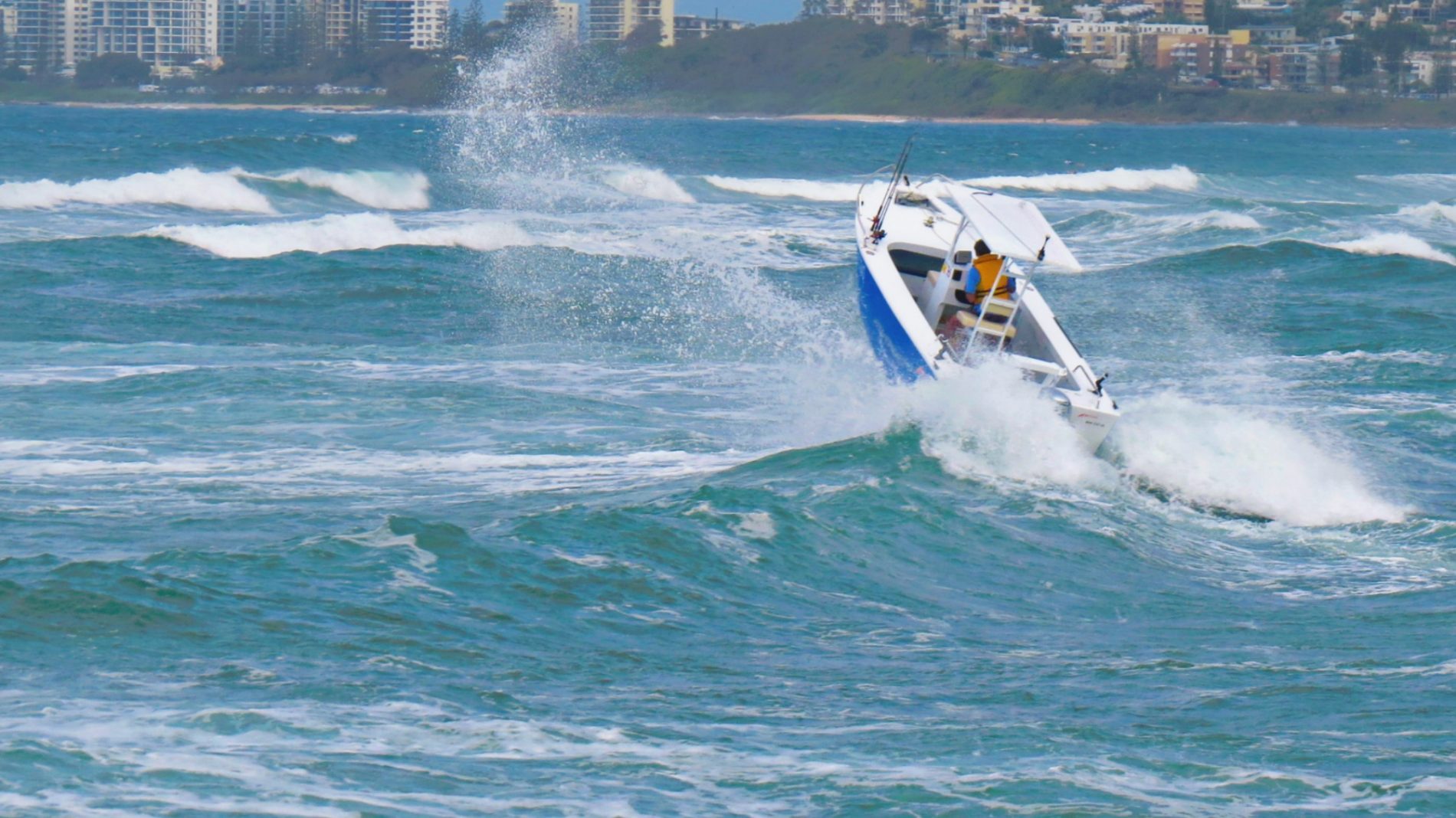 As a centre console craft the Waverider 610 naturally offers stacks of fishing room. Up front an open anchor well nestled behind a sturdy bollard, and bow rails strong and prominent. A full width under deck off floor shelf offered substantial storage area for even quite large items.

Further forward storage was offered via an under floor compartment. The floor area in front of the console was carpeted and elevated, offering a comfortable and handy place to fish; made even better by the fact that the fore deck corners in this area were neatly rounded for utmost safety and comfort.

The Waverider’s 320mm wide decks came set up with six rod holders per side along with 1m long side pockets, which were quite handy for other storage duties.

The windscreen and storage shelf equipped centre console had a strongly constructed hard top over it, extending aft to offer shade for skipper and mate. An LED light could illuminate the rear cockpit area. Headroom was ample; the shade a boon in our hot climate.

In an unusual configuration, the box-like structure with a padded top for seating right in front of the console turned out not to be a storage compartment; it was actually a 210L fuel tank that could, according to Pat Jones, give the craft a range of approximately 300nm at a steady 18 knots. Fancy a run offshore to the Barrier Reef up north? Easy.

Instrumentation on the console was functional. Up top a Garmin Echo Map 70S was set to port, a GME marine radio to starboard with a speedo and tacho plus trim gauge lower and to starboard, with a bank of switches opposite. There was ample space behind the windscreen for a large screen should an owner want to install one of these popular units.

Controls for the Honda 90 were within easy reach on the starboard side of the console; seating here consisted of a two person well padded unit attached to the rear frame work of the console’s hard top. 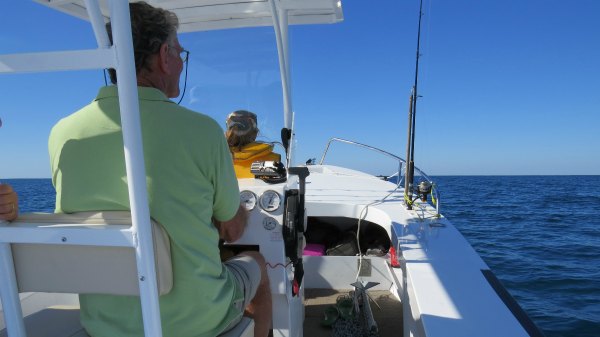 Wide decks plus ample freeboard of 860mm gave the Waverider’s main cockpit work area with its non-skid and self-draining floor a feeling of spaciousness. The craft’s interior cockpit sides were lined with inbuilt flotation material – the 610 has a 3C survey rating – which finished high enough from the floor to allow a foot hold if onto a large fish.

A wide off floor shelf at the transom offered ample room for out of the way battery and fuel filter installation while a bait station with rod holders was also a handy angling feature. Paired compartments in the transom could double as bait tanks or storage bins, as per owner’s requirements. Note that further rod holders aft are an option.

The pod astern on which the Honda 90 was mounted came set up with non-skid steps each side for easy access by divers, and a handy deck rail there to assist entry. 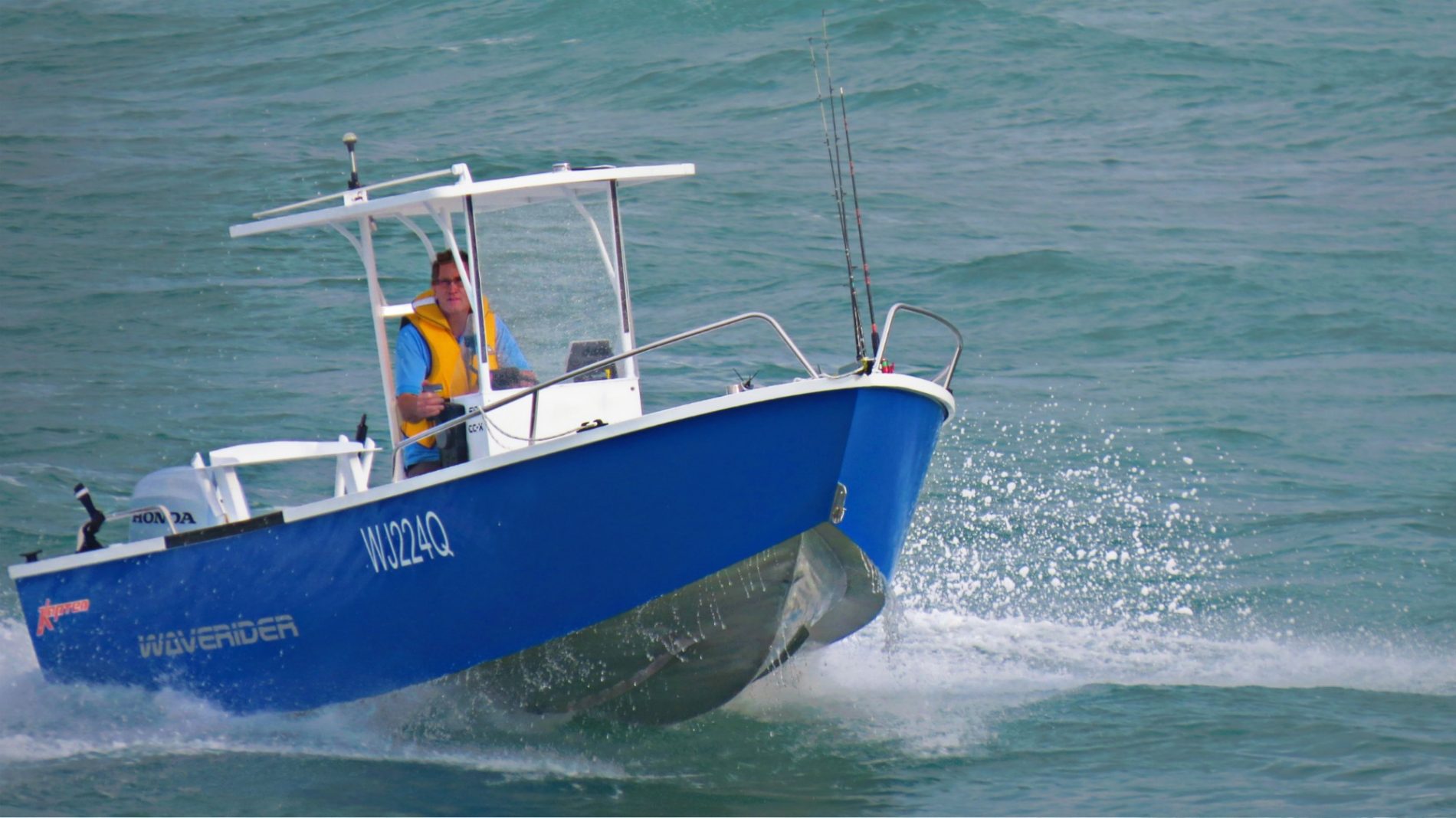 I saw the Waverider 610 Centre Console – X as a great offshore fishing craft with a standard of performance, ride, and handling that would make it a very useful fishing rig. Build quality and overall finish were excellent. She’s rated for up to six passengers although I’d see easiest fishing with perhaps four hands on deck in the offshore environment. About the only thing I’d put aboard for a day of bottom bashing or offshore trolling would be an icebox.

The craft came on a tandem axle custom-made trailer designed for roll off, drive on use. Price for the rig as reviewed was $53,900; reflecting the workmanship involved in the hull’s construction and the sort of performance it will deliver. 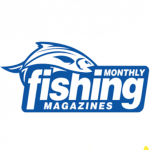