FM magazine’s review of the first Waverider prototype: “The Kapten Waverider 490 is a highly seaworthy alloy craft that has a unique internal side flotation and a somewhat radical design. Not surprising that it is the newest product from the innovative Boat Collar (a bow to stern floatation product) by inventor Pat Jones.

The reviewed Kapten Waverider 490 was powered by a Chinese manufactured 40hp Titan outboard. Sea trials were carried out in the ocean and although the craft featured was essentially a prototype, there’s little doubt that Pat and his team have come up with a very promising design.

The Waverider 490’s hull is a multi-faceted affair. A central hull section, with fine bow entry, is nestled within a pair of outer chines that are so large and prominent that you might think that a Boat Collar was in situ. However, the distinctive shape was formed from 3mm alloy, which is a very smart piece of manufacturing technique. The end result of the outer chines is similar to that experienced in a pontoon craft; the ride is softened by trapped air, with all leaning reduced once the outer sections contact the water.

The large outer chines continued the length of the hull but softened towards the stern, where it’s a lot less pronounced. The hull had a distinctive lift in the sheer line towards the bow; a feature that enhanced sea keeping ability as well as giving the craft a racy look.

Internally, the hull also benefited from the large outer reversed chines. A full length, central, raised floor saw any water aboard draining into recesses along the outer edge where a full length pocket was formed as a reverse image of the external chines. 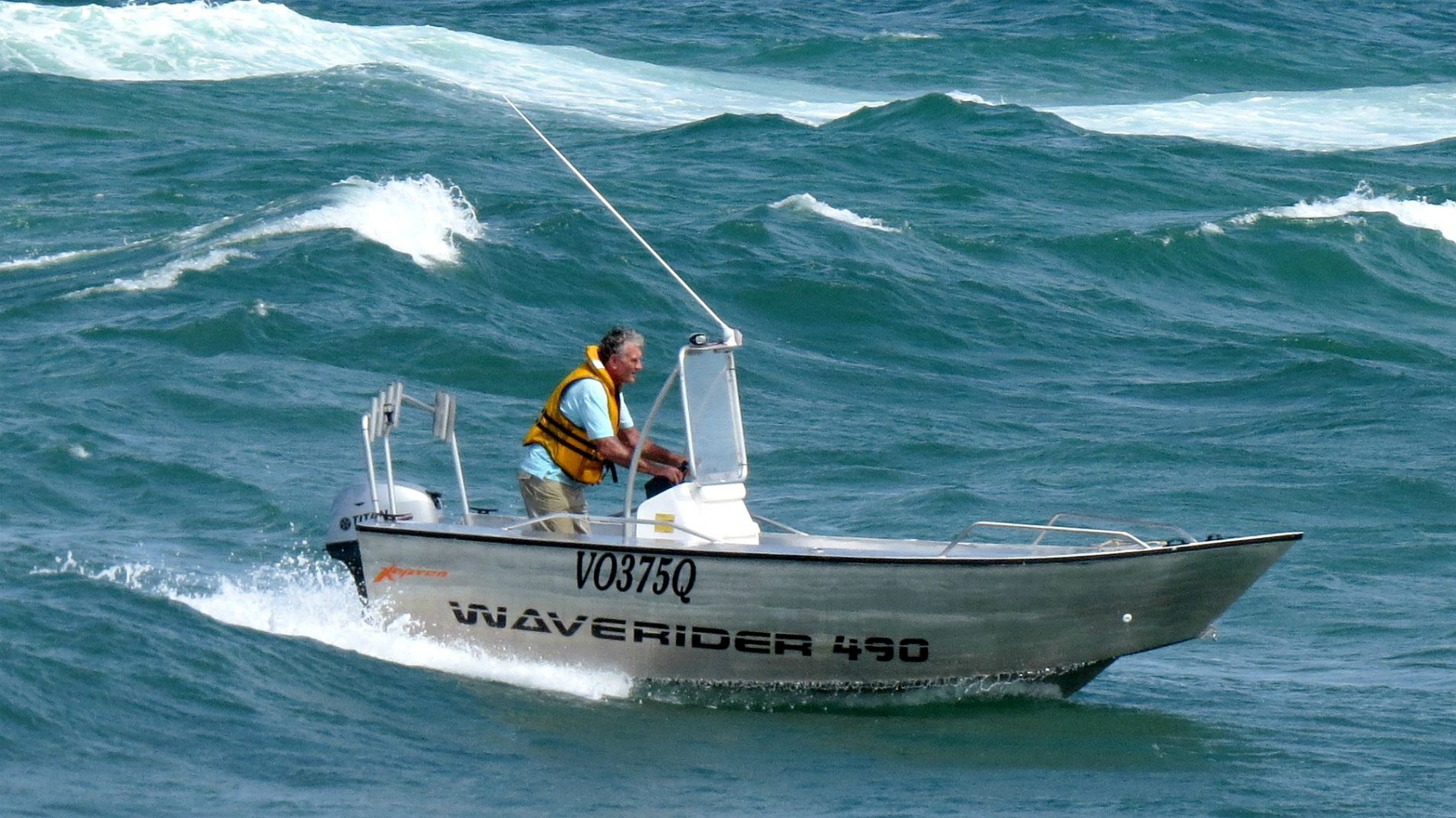 The Waverider 490’s layout reflected that the craft was the first off the production line, but there are a fair few modifications planned for subsequent crafts.

As a centre console rig, the wheel, forward controls, switches and tacho were set up on the upper section of the moulded console, which was linked to a heavy-duty frame supporting a fabric shade cover. Skipper and mate consequently stood at the console while the craft was under way as there were no seats fitted.

The console was equipped with a side door to port and Pat explained that the craft’s engine battery – currently located on the floor at the stern – would likely be located elsewhere, within a centre or side console in future models. He explained the internal layout would be up to the customer as they were intended to be custom craft.

Pat also explained that he was considering several options for seating with a padded ice box with bolster back rest as the most favoured; again seating would be a matter for the customer. A seat was available at the front of the console, the area under it being used for storage at the time. A section of floor in the bow was set aside for life jackets and the like although Pat explained that this area was again left for the customer to have the final say and a shelf or partition could be installed with ease.

The large floatation panels fixed to the interior sides of the hull ensured more than just level floatation standards were attained. The craft was available in 2C, 2D and 2E survey as standard, testimony to the efficiency of the material.

The Waverider’s 350mm wide decks were equipped with grab rails fore and aft as well as cleats. Rod holders were not fitted within the prototype but are certainly available in future boats. A tote tank of fuel for the 40hp Titan was stored in the aft starboard quarter astern within the reviewed craft.

Full marks on the water

The special design of the Waverider 490’s hull showed a lot of promise while on the water with sea trials permitting the craft to really hit its straps. While I watched, somewhat incredulously, Pat enjoyed some spectacular wave jumping, sharp turns, following waves at swell speed to show that the craft had no tendency to broach.

When it was my turn to jump aboard the Waverider and have a drive I gave the craft no quarter. I really enjoyed the great feeling of stability, level riding and smart turning that the hull was displaying. I also kept the craft exactly on the back of a wave and then slowly increased speed to move ahead of to see if there was the slightest tendency to broach. It stayed exactly on track.

Heading sharply into oncoming waves at pace and allowing the hull to come down dead ahead (instead of sliding to the side in best practice) generated no excessive impact. There was a bit of a bump, certainly, but nothing like the wallop I expected of a sub 5m alloy craft making such hard contact with the water.

The similarity to the ride of a pontoon craft was evident. The central hull made major contact with water, the massive outer chines served to cushion the ride and eliminate any tendency for the craft to lean at rest. The craft remained hugely stable due to the grip the prominent chines had on the water.

The craft tracked very well too. It was interesting to actually carry out speed tests in the ocean with two people aboard. Powered by the 40hp two-stroke Titan (engine ratings are from 40-70hp) the craft planed at 9 knots at 3,000rpm, 4,000rpm saw a speed of 15 knots on the hand held GPS with 5,000rpm recording 21 knots. I enjoyed cruising in offshore swells at a speed of 14 knots at 3,800rpm.

The Titan engine was new to me but it seemed to perform quite well, albeit somewhat keener on the decibel output than other carburetted two-stroke engines I’ve experienced. There was no excessive smoke and it started first turn of the key. A bit of research into Titan outboards revealed that these two-strokes are available from 3-65hp and while made in China share some components with other well known more recognisable brands on our markets. 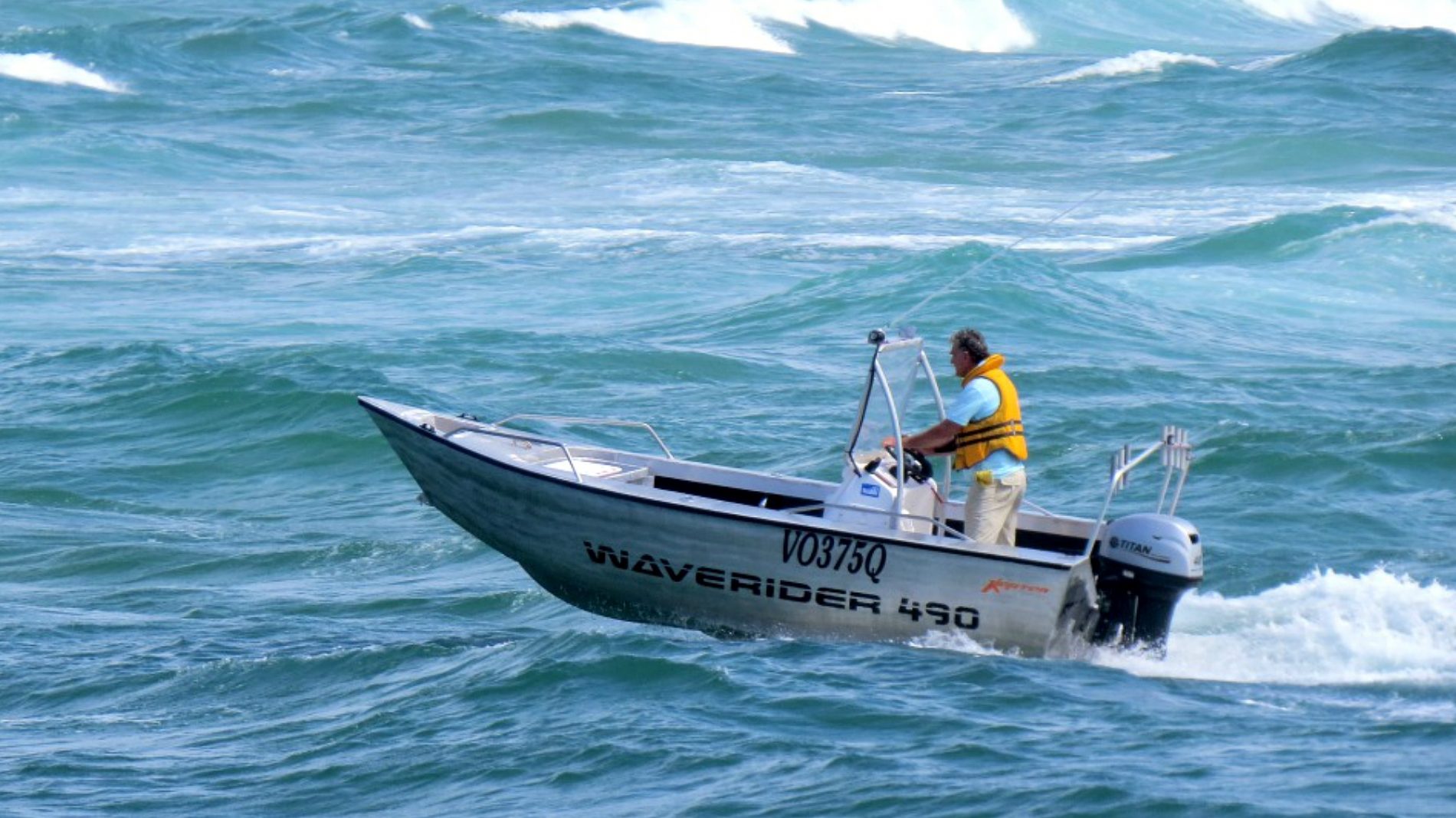 The Kapten Waverider 490 reviewed performed well in its core business; as a 4.9m boat one could take to the sea with confidence. It handled well above my expectations and was remarkably steady underway and at rest. I’d see it as a bay, estuary or offshore craft for the keen angler. As a first off the line prototype the bells and whistles were missing but as a craft that is open to customisation the buyer can have confidence in the hull’s capability and set about ordering just what is required in the finished product. 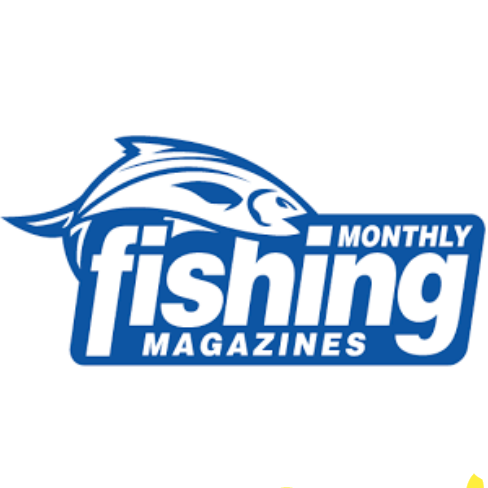 To see the 2nd and 3rd Waverider prototypes, click here